UNITED NATIONS: The UN General Assembly on Wednesday overwhelmingly adopted a resolution that “demands” Russia “immediately” withdraw from Ukraine, in a powerful rebuke of Moscow´s invasion by a vast majority of the world´s nations. Pakistan, China among 35 other coutries ‘abstained’ from voting at the UNGA resolution.

After more than two days of extraordinary debate, which saw the Ukrainian ambassador accuse Russia of genocide, 141 out of 193 United Nations member states voted for the non-binding resolution. India, China, Iran, Iran, Pakistan, UAE and 29 others abstained from voting against Russia at the UNGA. Of the total votes, 141 were in favour of the resolution, 5 against, 35 abstentions. This development becomes all the more interesting against the backdrop of the fact that senior diplomats from various European embassies based in Islamabad, asked Pakistan to condemn Russia’s armed hostility against Ukraine in the UNGA resolution. 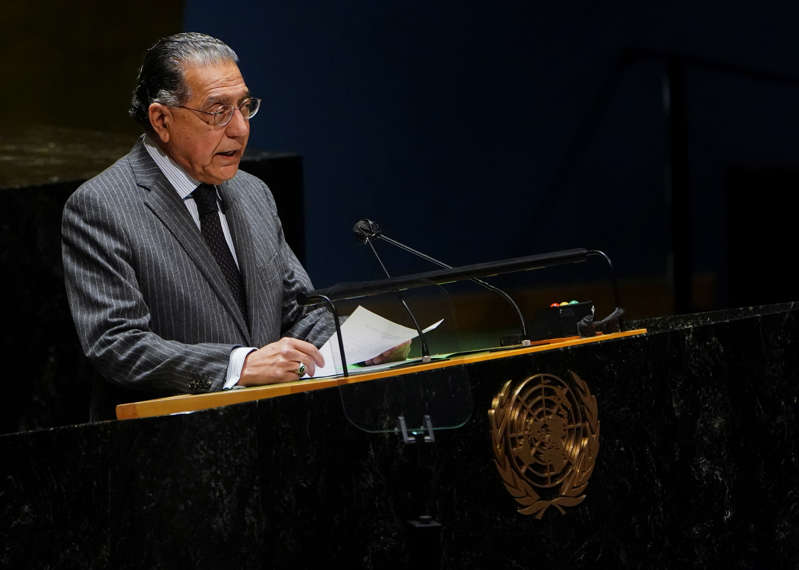 Ambassador Munir Akram told the General Assembly’s emergency special session, that Pakistan underscored the need for a diplomatic solution to the ongoing conflict between Russia and Ukraine, hoping that the talks initiated between the two countries at Belarus would bring about an end to hostilities.”Pakistan remains deeply concerned at the recent turn of events.

This reflects a failure of diplomacy,” Ambassador Munir Akram told the General Assembly”s emergency special session, which opened on February 28. The 193-member Assembly met less than 24 hours after being mandated to do so by a vote in the Security Council, following the 15-member Council’s failure to adopt a resolution deploring Russia”s recent actions in Ukraine.

In his remarks at the special session – the eleventh called since the founding of the United Nations – Ambassador Akram said Prime Minister Imran Khan had regretted the latest situation between Russia and Ukraine, and had hoped that diplomacy could avert military conflict. “We have since repeatedly stressed the need for de-escalation, renewed negotiations, sustained dialogue, and continuous diplomacy,” the Pakistani envoy said. “All efforts must be made to avoid further escalation of violence and loss of life as well as military, political and economic tensions, which can pose an unprecedented threat to international peace and security and global economic stability. “As consistently underlined by Prime Minister Imran Khan, the developing countries are hit the hardest economically by conflict anywhere,” he said.

“We hope the talks initiated between representatives of the Russian Federation and Ukraine will succeed in bringing about a cessation of hostilities and normalization of the situation. “A diplomatic solution in accordance with relevant multilateral agreements, international law, and provisions of the UN Charter is indispensable,” the Pakistan envoy added.

At the outset, Ambassador Akram echoed expressions of support for the UN Charter principles of self-determination of peoples, non-use or threat of use of force, sovereignty and territorial integrity of states, and pacific settlement of disputes.”Equally,” he said, “Pakistan upholds the principle of equal and indivisible security for all. These principles must be consistently and universally respected.” Pakistan, he added, also supported all efforts to provide humanitarian relief to civilians in the affected areas.

Akram also voiced concern about the safety and welfare of Pakistani citizens and students in Ukraine, noting that the majority of them had been evacuated and that the few who remain would move out soon. “We appreciate the cooperation of the Ukrainian authorities as well as the Polish, Romanian and Hungarian governments in this context,” the Pakistani envoy said.